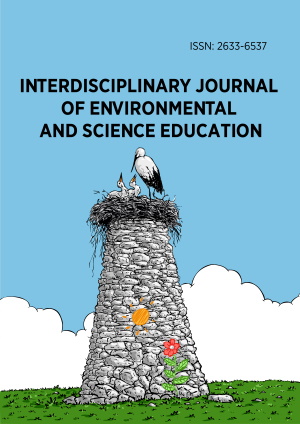 Research Article
The Potential and Limitations of the Wadden Sea in University, School, and Out-Of-School Contexts From the Perspective of Biology Education
Till Schmäing, Norbert Grotjohann
Interdisciplinary Journal of Environmental and Science Education, 2022, 18(4), e2286, https://doi.org/10.21601/ijese/12072
ABSTRACT: This study explores the potential and the limitations of the UNESCO World Heritage Wadden Sea in terms of its relevance for teacher training in higher education and for teaching in schools and as an out-of-school place of learning. Interviews with experts from these three areas were conducted. The analysis was performed through qualitative content analysis. Within this framework, various factors were identified that should be considered in further biology didactics studies. The findings indicate that out-of-school learning receives too little emphasis in teacher education and that the Wadden Sea offers opportunities to address this deficit. In addition, clear limits were set for school lessons on this ecosystem in contrast to practical explorations of the Wadden Sea. Nevertheless, incorporating Wadden Sea content in the classroom makes sense since diverse topics can be vividly explored. Out-of-school learning at the Wadden Sea was found to have an immense potential in education for sustainable development and in environmental education. One obstacle is the students’ reported disgust towards the Wadden Sea. Based on the results, conclusions are drawn for all three areas considered in this study, providing concrete implications for related studies with a focus on biological education on the Wadden Sea.
PDF

May 07, 2022
Research Article
Taking Care of Life from Amazonian Indigenous Cosmogony: Implications for Teaching Biology as a Cultural Practice
Norma Constanza Castaño Cuellar, Leidy Marcela Bravo Osorio
Interdisciplinary Journal of Environmental and Science Education, 2022, 18(3), e2281, https://doi.org/10.21601/ijese/12024
ABSTRACT: In Colombia–South America, there is an urgent need to address educational processes in culturally diverse contexts that permeate the understanding and contribution to the training of teachers in situated processes, because this is a multi-ethnic and multicultural country. From this perspective, we present the results of an investigation that analyzed the biology degree projects of Indigenous students from La Chorrera (Amazonas) at the National Pedagogical University of Colombia, in order to characterize the different epistemological and ontological aspects that underlie them and as a way of guiding the initial training of teachers.
The methodological perspective of this research is critical hermeneutics, using documentary analysis as a strategy. As for the theoretical foundation, it is oriented from the approaches of critical inter-culturality and epistemological pluralism.
In a nutshell, it is necessary to think about the teaching of biology as a cultural practice, which places in the debate the place of biology as a science of life and the living, its relationship with the contexts of students and the possibilities of empowering knowledge for the defense of territories and life itself. This implies the idea that as human beings we are constructed in relation to other organisms; hence, the importance of understanding the living from life, allowing respect for all forms of life and forging a world where there is room for biological, cultural, epistemic, and ontological diversity.
PDF

Apr 16, 2022
Research Article
Virtual Coverboarding: Using Local Biodiverity to Engage Science Majors
Shem D. Unger, William R. Merian, Mark A. Rollins
Interdisciplinary Journal of Environmental and Science Education, 2022, 18(4), e2279, https://doi.org/10.21601/ijese/12016
ABSTRACT: There is a current need to develop engaging, informative online activities for science majors and potential future citizen scientists, particularly given the increase in the online teaching environment following COVID-19. Given this potential for online teaching to continue to increase, it becomes ever more essential to provide undergraduate students with methods that allow students to remotely access common methods used for sampling species while still engaging students in learning about local species diversity. This study assessed the potential for an interactive, online course-specific website to connect and inform first-year undergraduate biology majors (pre-health majors to environmental science) on local leaf litter species diversity. The website included species encountered as part of an ongoing on-campus biodiversity monitoring project using coverboards. Students navigated to the website, answered questions on the types of organisms, and completed a short survey. The survey questions reviewed whether the website was engaging and informed students on campus biodiversity of both reptiles and arthropods. Students overwhelmingly responded positively that the website was helpful to advise them on local species and their natural histories and engaged and piqued their interest. Therefore, we recommend incorporating course websites as teaching tools to catalog local species to teach undergraduate biology majors.
PDF

Apr 15, 2022
Research Article
Performance Analysis of Biology Education under the Implementation of Lower Secondary School Biology-Competence-Based Curriculum: Policy Implications
Emmanuel Bizimana, Dieudonné Mutangana, Adrian Mwesigye
Interdisciplinary Journal of Environmental and Science Education, 2022, 18(1), e2259, https://doi.org/10.21601/ijese/11331
ABSTRACT: Education in general and science particularly are believed to promote the country's development. To this end, the government of Rwanda and its stakeholders in education have put efforts in place expected to improve the teaching and learning process of science and performance as well. Some of these efforts include among others the adoption of a Competence-Based Curriculum. This study analyzed the performance of students in biology among public lower secondary schools based on gender, type, and school location in Nyamagabe district, Rwanda during the implementation of BCBC. An ex-post facto research design was adopted to analyze biology grade scores of 3,129 students, who sat for the 2018 Ordinary Level Biology National Examination. Descriptive statistics and an Independent Sample t-test were used to analyze data. Results evidenced that students' performance in Biology was low (49% failed). The study found significant differences in students’ performance based on gender (t=-11.59, p<0.05), type of school (t=-19, 46, p<0.05) and school location (t=-6.36, p<0.5). The study concluded that despite the introduction of the Biology Competence-Based Curriculum (BCBC), the students’ performance in biology is still not encouraging. The gender, type of school, and school location affect students' academic performance in Biology. The findings provide the government and its stakeholders with insights on the need to encourage female students to study Biology, fund and equip day and rural secondary schools with both human and instructional resources to improve teaching and learning Biology as well as students’ performance in the subject.
PDF

Nov 09, 2021
Research Article
Analysis of Greek Textbooks about Marine Biology
Panagiotis K. Stasinakis
Interdisciplinary Journal of Environmental and Science Education, 2021, 17(2), e2234, https://doi.org/10.21601/ijese/9336
ABSTRACT: Greece is located at the southeastern edge of the European Union, surrounded by coastline that reaches 18 thousand kilometers. This study aims to analyze educational material, the textbooks used in secondary education - Gymnasium - to determine whether students and future citizens of the country are taught in depth issues related to Marine Biology. Analyzing content, applying biophilic typology and recording observations, reveals several positive points and weaknesses that require improvements. The analysis recognizes the need for a more organized approach to Marine Biology issues, to be more actively integrated into teaching.
PDF

Jan 01, 2021
Research Article
The Use of The Lesser Kestrel’s Life Cycle to Enhance Elementary School Children’s Understanding of Complex Systems
Adiv Gal, Dafna Gan, Orit Ben Zvi – Assaraf
Interdisciplinary Journal of Environmental and Science Education, 2021, 17(1), e2226, https://doi.org/10.29333/ijese/9152
ABSTRACT: Understanding the complexity of ecological system is crucial if one is to achieve a proper understanding of what they are and how they function. This study followed an environmental education program designed to introduce fifth grade students from a highly rural community to the world of ornithology and to the importance of maintaining the biodiversity of birds in nature. Its goal was to explore the program’s influence on the development of these students’ system thinking skills in the context of the life-cycle of the Lesser Kestrel (LK). Students’ perceptions of system complexity were tracked using the repertory grid technique, which takes the form of a highly structured interview in which constructs represent participants’ interpretations of various elements and the relationships between them. The results indicate that these fifth graders developed a significantly complex view of the LK’s ecosystem. Participation in the program developed the ability of some of the students to generalize and to identify changes that occurred in the birds’ ecosystem over time. Design elements such as longitudinal real-time observations and learning about the kestrel’s life-cycle while examining its interaction with its environment were found to be important for system thinking development. These cognitive tools may enable students to better cope with complex, biodiversity-related environmental issues in the future.
PDF

Nov 10, 2020
Research Article
Contextualisation of factual knowledge in genetics: A pre- and post- survey of undergraduates’ understanding of the Nature of Science
Imme Petersen, Stephanie Herzog, Corinna Bath, André Fleißner
Interdisciplinary Journal of Environmental and Science Education, 2020, 16(2), e2215, https://doi.org/10.29333/ijese/7816
ABSTRACT: Having an adequate understanding of the Nature of Science (NOS) is an integral part of scientific literacy. However, NOS is usually not yet explicitly embedded in the science curricula at German universities. To fill this gap, we have introduced NOS elements in the undergraduate course on genetics at the biology department of an Institute of Technology in North-western Germany in summer semester 2018. The strategy used an exclusive-reflective approach by emphasising socio-scientific issues. As Kostas Kampourakis (2016) suggests, our design considers not only general aspects of the NOS concept, but also the family resemblance approach presented by Erduran and Dagher (2014). To evaluate changes in students’ NOS understanding, we did a pre- and post-survey about their NOS understanding following the SUSSI questionnaire designed by Liang et al. (2008). The NOS understanding of the 93 participants shows statistically significant improvement in 14 out of 24 items (58,3%) after the teaching unit, compared to the pre-survey. While the pre-survey shows a larger gap of understanding regarding the relations of environment, theory, and law, the post-test results show significant effects on learning, in particular regarding subjective, social, and cultural influences on science. However, the students’ understanding regarding the relations of environment, theory, and law still remains weak. The findings indicate that some preconceptions were not as amenable to change as others. In particular, the assumed facticity of scientific knowledge seems to be a powerful preconception that is much more firmly fixed than the contextualization of scientific discovery.
PDF